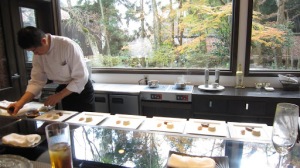 L’Herlequin Bis is an annex restaurant owned by Junichi Ito, who is also the executive chef. It’s located in the hills of Yugawara, which is an area known for its hot springs. There’s definitely a lot less traffic of customers than at his restaurant in Tokyo but I can see why he chose this spot. He combines Japanese and French technique and uses local ingredients. I’ve never really liked “fusion” cuisine in the U.S. and most other countries because as cliche as this may sound, many chefs do mistake it for “confusion”. I love Japanese influenced French and Italian cuisine in Japan because they actually fuse the two cuisines right. They use local, traditionally Japanese ingredients with foreign cooking techniques and preparation. After working in Belgium, France and Italy, Chef Ito went back to Japan and realized that he was so engrossed in learning about European cuisines that he had abandoned his own culture. He decided to work for a restaurant in Tokushima, Japan, where he finally got in touch with Japanese cuisine, which places an emphasis on the true characters and flavors of ingredients.

I went to his restaurant for lunch, which consisted of an amuse bouche, two appetizers, a fish dish, a meat dish, a rice dish, and three desserts. Imagine having this meal in New York City- it would easily go for $80-$100 or even more including tip. This lunch was 5250 yen, which is less than US$50 (plus we don’t tip in Japan and still receive better service than in the US).

We sat at the counter where we could watch the cooking and admire the beautiful view of autumn leaves through the huge windows. Chef Ito was modest and polite, and made small conversations with us as he plated his simple, yet perfectly executed dishes. There was no server at this restaurant- only the chef and his two cooks, yet service was smooth and we were never kept waiting for long.

Oyster with turnips, celeriac puree and trout roe
Seasonal local vegetables with squid and trout
Porcini flan with foie gras and port sauce
Sawara fish with brussel sprouts and olives
Shamo (free range chicken) with seasonal vegetables
Pork roulade (stuffed with langoustine) with a mustard vinaigrette
Even though it’s a French restaurant, a meal in Japan is never complete without a bowl of rice or noodles- so we had crab rice.
Frozen mikan (like clementine)
Puff pastry with pastry cream and berries- simple but delicious!
Black beans, kanten and vanilla ice cream with a black sesame sauce 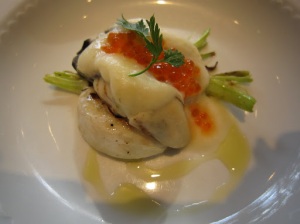 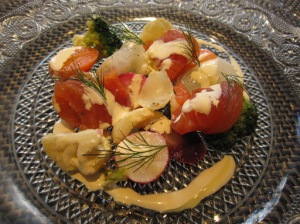 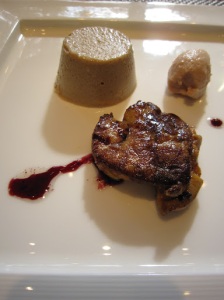 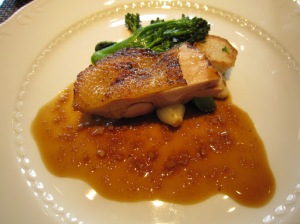 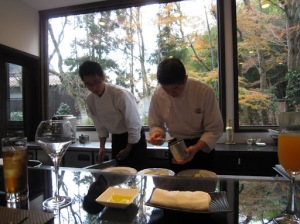 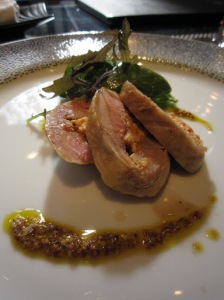 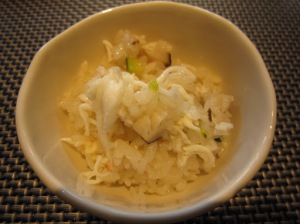 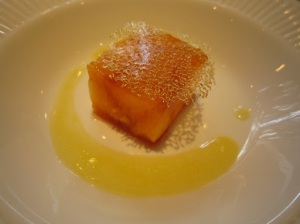 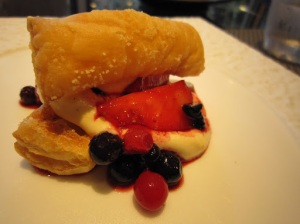 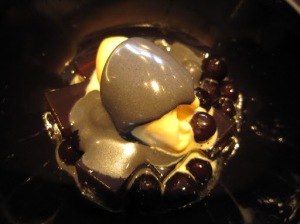