I personally find it quite hard to eat healthy for breakfast (especially during winter) because when I wake up I’m generally really hungry and don’t feel like munching on oatmeal or a cold bowl of whole grain cereal. I’m by no means a granola crunching kind of person but I bought a breakfast granola with yogurt (and strawberries and banana) at the Newark Airport Jamba Juice. I was about to board my flight to Japan and I wasn’t planning on eating the terrible plane food served on Continental (and apparently it’s easier to get over jetlag if you don’t eat on the plane) plus it was morning time in Japan so it seemed like the natural choice. All the other food available in this terminal just didn’t appeal to me (bad American Italian food, crappy pizza and other greasy foods).

What I like most about granola is the crunchy texture. Makes yogurt a lot more exciting to eat. So when I got back I bought a quart of granola and sometimes ate it for breakfast with yogurt and fruit (or as a snack). I was looking at the ingredients in the granola mix and realized that it wasn’t as healthy as I had thought because it had corn syrup and sugar added to it. A classmate of mine told me he makes his own granola so I decided to do it as well. In fact, I had all the necessary ingredients at home. I tossed some rolled oats, pumpkin seeds, almonds, cashews and walnuts in a brown sugar syrup (added molasses to it) and toasted them in a 300 degrees Fahrenheit oven for 30 minutes (occasionally tossing them). The outcome: crunchy yumminess 😀 and I like the flavor of the brown sugar/molasses. It’s so good I would eat it as a snack as well. 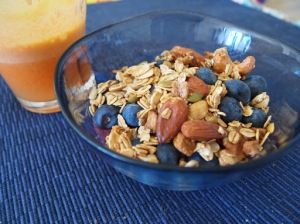 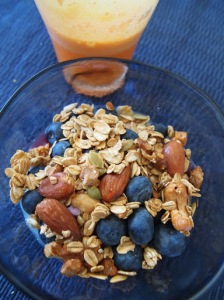