Skip to content
With my sweet schedule for the semester, I was able to make it to two days of the 5th annual international chefs congress in NYC hosted by Starchefs (September 20-22, 2010).  The ticket was expensive but it was worth it.  It was intimidating being a culinary student amongst mostly professionals in the industry but I got to taste different foods and wines, and learn about what’s going on in the food scene. 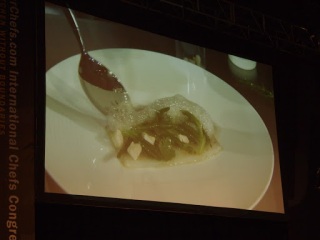 Main stage: Chef Dan Hunter from Australia.  He is the executive chef at a restaurant located about an hour outside Melbourne at the Royal Mail Hotel. His cuisine is based on nature and he seems to strive to make his dishes look almost like landscapes.  He uses a lot of wild ingredients that he can find near the restaurant (certain types of seaweeds etc.) as well as organic and heirloom produce and cooks them using modern techniques (sous vide etc.)

As much as I criticize how chefs in America are idolized, I was excited to see a lot of leading chefs and other well known industry people at this event.  I equate it to being at a culinary version of the Emmy Awards.  Besides Thomas Keller, I saw Marcus Samuelsson of Aquavit, Johnny Iuzzini of Jean George, Jacques Torres, author Michael Ruhlman, Wiley Dufresne of wd50, bartender Dale Degroff, executive pastry chef Alex Grunert of Blue Hill, Dan Barber of Blue Hill…

There were booths run by food, wine, beer and kitchen equipment companies for people in the industry to check out.  I felt bad going around tasting because I wasn’t a real potential client but I did pay for the event so I made sure to try everything! This fruit called carica from Chile caught my attention.  It was packed in syrup but quite tasty.  They describe it as tasting like pineapple, pear, peach and some other fruit.  Apparently it’s only found in Chile but I came across a fruit similar to it in Colombia.  It had a different name but it looked the same.  But the only thing was, this fruit that I bought in Colombia did not taste good raw at all.  My Colombian friends told me that it’s usually not consumed raw, so there’s a possibility that it’s the same fruit. 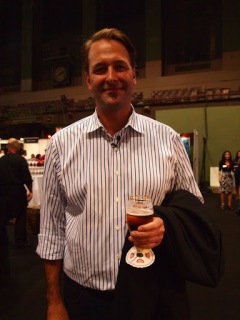 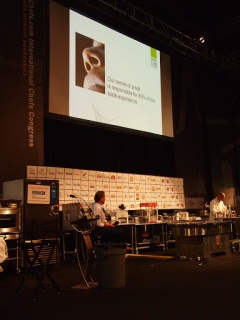 Main stage: Chocolatier Dominique Persoone and food scientist Bernard Lahousse from Belgium.  This presentation was fascinating.  Lahousse explained the research that he has been doing based on the compatibility of combination of flavors.  He gathered data of different flavor profiles and came up with a scientific analysis to explain why certain flavors go well together.  His website offers lists of foods that go well with specific ingredients.  And chef Persoone basically makes a lot of his chocolates based on Lahousse’s findings.

Everyone in the audience got a box of four different chocolates and a beak, which we wore to help us smell better! Chef Persoone explained the story behind each chocolate and would describe a setting, and release a smell associated to it.  For example, one of his chocolates had water inside it! I can’t remember how he managed to make it but it was fascinating.  He described rain and there was a smell of water/rain released into the room.  He then told us to close our eyes and take a bite.  I guess his point was that external factors and your olfactory senses are important when tasting food. 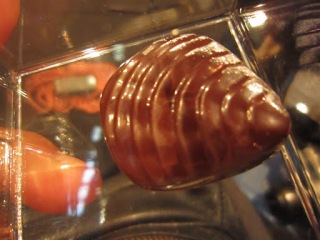 This shell shaped chocolate actually had macerated oyster inside! The brininess was a good combination with the milk chocolate.

A cute little tequila chocolate.  We licked the salt, ate the chocolate and squirted the tequila into our mouths.  It was such a fun presentation!

Chocolate shooters: imagine taking a hit of cocoa powder using a little plastic catapult… Chef Persoone came up with this fun and wacky concept for the Rolling Stones.  They were in Belgium when two of their band members had birthdays, and they celebrated at his birthday.  When asked to include a fun chocolate idea, he thought of chocolate hits, totally suitable for the Rock n Roll band! The smell of chocolate stays in your nose for a very long time and if you’re not careful you’ll have brown powder all over your nostrils!
Somm Slam
I attended Somm Slam on day three, not knowing that you had to be a food industry professional to vote.  But I reasoned that they could use one judge to represent the public because after all, it’s the general public that makes or breaks a restaurant.  After day one and two, sommeliers Andrew Meyers and William Sherer made it through to the final round.  Chef Iacopo Falai of Falai made three courses and the sommeliers had to choose a wine from the Spanish selection in front of the room.  After tasting the food, the sommeliers were given some time to taste the wines and finally make their choice.  We tasted their pairings and chose the one we preferred for each course.  I really liked William Sherers approach to food and wine pairing, but ended up voting for Andrew Myers twice.  In the end, Andrew Meyers won the competition and the grand prize was a trip to Italy!

Myers on the left, Sherer on the right
Summer of Riesling
Sommelier Paul Grieco of Terroir led a riesling tasting.  This man is truly passionate about riesling and his love for this grape varietal definitely rubbed off on me.  Before attending culinary school and being exposed to so many wines, I definitely was guilty of having the impression that all rieslings were sweet.  I prefer high acid wines so I would always dismiss the rieslings, believing that it would be sweet.  The sweet-dry rieslings he chose definitely exemplified how there are plenty of well balanced rieslings.  Even the sweeter rieslings had amazing acidity, finesse and complexity.  I now almost always order a glass of dry riesling when I want a high acid, crisp wine with my food. 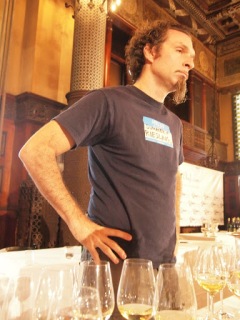 Cocktail King: Dale Degroff
I had watched an old video of bartender Dale Degroff in my restaurant row class because my Professor insisted that he was the best bartender in New York.  So I was excited to see him in person and do a demonstration.  Unfortunately I couldn’t try what he made so I don’t have much of an opinion.

Main stage: Toque
Chef Normand Laprise and two cooks from his restaurant, Toque, came from Montreal to do a demo.  The concept for his restaurant is to minimize waste.  So he uses a lot of offals and maximizes utility for all produce.  One of the things that interested me was their tomato syrup, which is basically reduced tomato water.