On Saturday, my friend and I walked from Columbus Circle to around 96th street through Central Park because he wanted to go to a raquetball tournament.  It was a beautiful, sunny, breezy day and as I was lying in the grass looking at where we were on blackberry maps, I realized that we were only 20 blocks away from Harlem.  I immediately suggested we walk further north to go eat some fried chicken.  I really wanted to go to Charles’ Pan-fried Chicken but it was a little too far up, so we went to Amy Ruth’s instead.

I hadn’t been there for two years but nothing had changed in the restaurant.  I ordered The Ludacris (four chicken wings) with mac & cheese and collard greens.  My friend ordered the Reggie Harris (Southern honey dipped fried chicken) with grits and coleslaw.  Portion wise I thought mine was more generous.  The chicken wings here are definitely my favorite in town- crispy outside, juicy inside, no sauce around it… The mac & cheese could’ve used a little more salt but other than that the meal completely satisfied me.  We ordered a banana pudding and velvet cake for dessert but it was a little unnecessary since they were huge and on the sweet side. 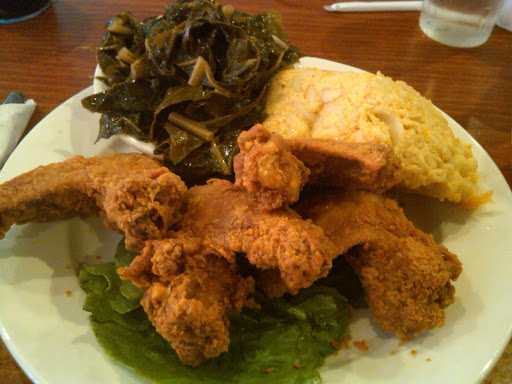