My family has been a regular customer at Fujiyoshi for at least ten years now. My mother, who grew up in Fujisawa, came here first when she was in her 20s, but it was not until my parents moved back to Japan from Singapore, that we started frequenting the place again.

We’ve tried other tempura spots, and my dad insists that if you go eat tempura of the same quality and level as Fujiyoshi in Tokyo, you would have to pay at least twice the price. You can have the omakase course and drink a fair amount and the bill will not even come up to 5000 yen per person!

It’s not only the food that makes this place, but the owner chef as well (and his wife!). When I plan a trip to see my parents, I always buy a gift for him because I know I will definitely be eating there. He loves chocolate and wine, so I usually get him either of the two. He actually has some sort of sommelier certification and has a few wine offerings at Fujiyoshi. He is originally from Kyoto, and has a wealth of knowledge about Japanese ingredients and Japanese culinary culture in general. He has a calm demeanor and is humble like most Japanese chefs, but he has a humorous side, which makes dining at the counter that much enjoyable and comfortable.

The restaurant only seats about 8 along the counter, and there are two tables (zashiki- you have to remove your shoes) that will seat 2 four tops. They do have a space upstairs for private parties. It’s located in a small alley, and is a cosy restaurant that attracts many regular customers (average age is on the higher side). They play オルゴール(music box style remix of Japanese pop music), which might be annoying elsewhere, but I find it rather calming since I’ve gotten used to it!

The chef knows that my mum hates shiitake, and that my dad likes to add an egg tempura on top of his ten-don at the end of his course. I have brought pretty much every single friend who has ever visited Kamakura (where my parents live) to Fujiyoshi, and this time I brought my boyfriend, who was deeply impressed with the experience.

We had dinner on a rainy Thursday night and the only other customers dining were three (by the looks of it) regular customers (or常連客). The potato salad may look quite ordinary but the dressing that he serves with it is so good (house made of course), and he always garnishes them with seasonal vegetables. The a la carte tempura menu consists of items that are available throughout the year (shrimp stuffed shiitake, squid, natto, kisu etc.) but he has plenty of seasonal appetizers and tempura available. Although he is from Kyoto, his tempura is Tokyo style because he uses sesame oil to fry. This was the first place I started eating tempura with salt. When I was younger I never liked eating tempura with tentsuyu (the dashi dipping sauce), so this made an impact on me. The chef says that you should never eat tempura with the tentsuyu first. He says to eat it with the salt first, then take a sip of beer, and then eat it with the tentsuyu if you want to.

I pretty much never eat tempura while I’m in New York because it’s just so different! It’s a shame that the New York City laws prevent tempura bars from opening up. You need a sneeze guard, which kind of ruins the atmosphere, and surely the NY fire department wouldn’t allow food to be deep fried right in front of the customer…

On this day we had some 初ガツオ(first katsuo/bonito of the year) tataki (seared), which was served with a generous amount of myoga and a delicious eggplant that even my boyfriend who doesn’t like eggplant, ate and enjoyed.

When we order the course he always makes sure to throw in some seasonal ingredients and we often can discuss what we want. Because it was my boyfriend’s first real tempura experience, he made sure he added some interesting stuff, like ginpo, which he says is not tasty cooked any other way so people often say that it was born to be eaten as tempura. He butchered both the ginpo and anago (conger eel) right before deep frying them. He is the only person who cooks, though he has one kitchen assistant who plates and serves some of the side dishes. He does a lot of the prep to order (especially seafood) so his knife skills are swift and precise. We also had some ドジョウ, which are tiny river fish, and when he fries them they squeal a little… They are served with fried gobo (burdock) and some scallion.

My favorite items that are available throughout the year, are the shrimp stuffed shiitake (which he minces and stuffs to order) and pon de queijo (glutinous Brazilian tapioca and cheese bread, which he fried and smears with some Boursin cheese!). At the end of the meal you have a choice between somen (noodles- the ones they use here are exceptional and retain a great texture, and his dashi is spot on), plain rice (served with kakiage- a tempura of shrimp and squid), ten-don (the kakiage is served on the rice and drizzled with tentsuyu) or ochazuke (the kakiage on rice has tea poured over it). The rice and miso soup here is just absolutely delicious. The miso soup is usually a shijimi red miso soup. This night we had about 5-6 seafood items and 5-6 vegetable items and we paid a little less than 5000 yen per person (this included all the other items in the course). Amazing! Definitely can’t get a deal like that in Manhattan! 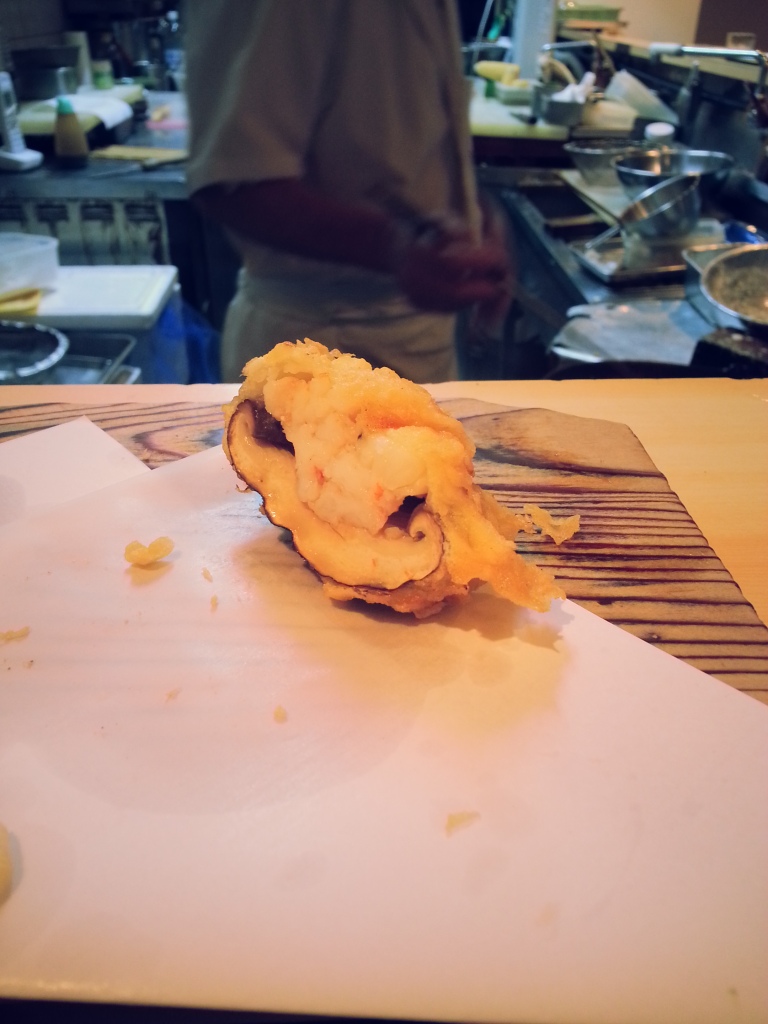