After a tour of the city of Bilbao, we walked over to the Guggenheim Museum to have lunch at the restaurant.  The chef de cuisine (or sous chef?) took us on a brief tour of the kitchen. 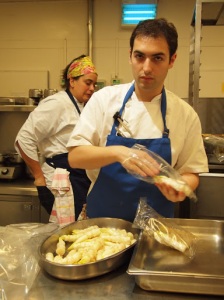 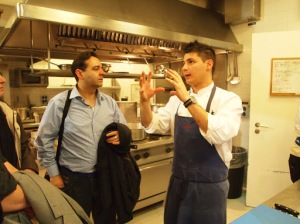 The R&D room where they test recipes.  Instead of making stocks the traditional way, they extract flavors from meat/bones/vegetables using the equipment in the photo below.

Poached egg with onion broth.  The onion broth was SO good- really concentrated flavor of onion (must be the way they extract it using their equipment).  The egg was beautiful as well.

Eggplant stuffed with onion and mushroom.  Very interesting dish.  The purple color of the eggplant was incredibly beautiful.  The eggplant was completely tender and the combination of eggplant with mushrooms was new to me but worked very well. 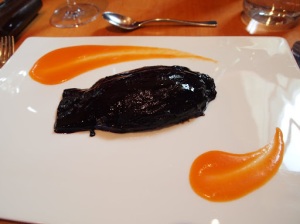 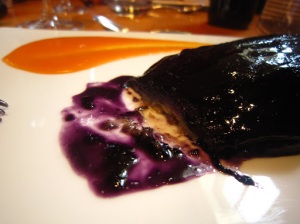 Smoked tomato stuffed with seafood, served with squid ink risotto.  The smokiness of the tomato was subtle, which was nice, but the dish overall smelled quite fishy.  The squid ink risotto was right on point though.

Turkey with a passion fruit glaze, served with cabbage and bacon.  The turkey was very tender and delicious but I wasn’t a fan of the passion fruit glaze.  The cabbage had ginger in it, which I liked.  I got a strong taste of white pepper too but apparently there was none in it…

The dessert was absolutely divine.  Very simple flavors but deliciouuuussss.  It was a chocolate sponge cake (SO fluffy- apparently made in a microwave) with vanilla ice cream and coffee mousse (sort of gelatinous).