Skip to content
M Wells
21-17 49th Avenue
Long Island City, Queens (at 21st Street)
718-425-6917
Unfortunately as I write about M Wells, there is sad news that it will close at the end of August.  Apparently they have another location but it’s not known when they will reopen.  Read the article here.
M Wells is really a place for people who love to eat.  I was told that it was not an actual diner and that the menu changes regularly so I was picturing a spread of healthy, local and organic dishes.  Instead, I learned that it was owned by Chef Dufour, who used to work at Au Pied de Cochon in Montreal (which I have actually been to) so a lot of the food was a heart attack waiting to happen.
When I walked into this retro diner, I thought they were trying too hard to just be different and hipster.  But once I ate their food I didn’t care about their slow service or attempt at making Long Island City the next Williamsburg.  We ordered a few dishes and shared them family style- the best way to eat with friends.  There really is no clear theme or concept for the food here… They just serve whatever tastes good I suppose- and I had a bit of a problem wrapping my head around it at first.  But my taste buds and belly had no problem accepting M Wells. I didn’t take a photo of the herb salad with buttermilk dressing but it was an eye opener! Loved the dill in the salad and there was plenty of dressing coating each leaf. 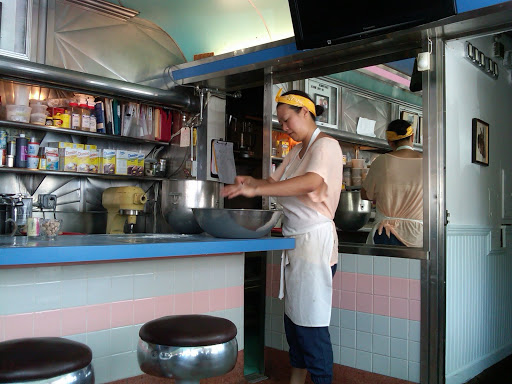 I knew I had to eat this when I saw another table order it.  Escargot with bone marrow! It’s absolutely genius!

I didn’t know what to expect when we ordered the gravlax pie but it exceeded my imagination.  One of my favorite dishes of the meal.  Loved that there was salmon roe on it.  Served with creme fraiche and potatoes.

The steak tartar was just alright, nothing special

We were so full at the end but I HAD to order the banana cream pie.  It was not too sweet and the crust was close to perfect.  Loved it!