http://petritegi.com/
Address: Petritegi Bidea, 20115 Astigarraga, Gipuzkoa, Spain
Phone:+34 943 45 71 88
During my three weeks in Spain, San Sebastian was the region I enjoyed the most. And during my time in San Sebastian, this sidreria (or cider house) was perhaps the most memorable spot. I had tried hard cider before- the kind that tastes like apple juice, but cider in San Sebastian is something different. While every batch is slightly different, overall these ciders (or sidra) are quite funky and have a very nice amount of acidity and yeasty flavor with a pretty dry finish.
We first took a tour of the cider house to see the production process. The we were brought to a place that looked like a beer hall. They had large wooden barrels of cider and we basically went to different batches and poured ourselves some cider. We were told not to bring our glasses back to the table to drink with our food. So we stood around socializing with everybody else there as we enjoyed the cider and cheered “txotch!” (pronounced “choch”). And we went back to the table every time they brought us some food.
The first dish was a HUGE bacalao (salt cod) omelet, which was absolutely delicious. Cooked and seasoned perfectly. 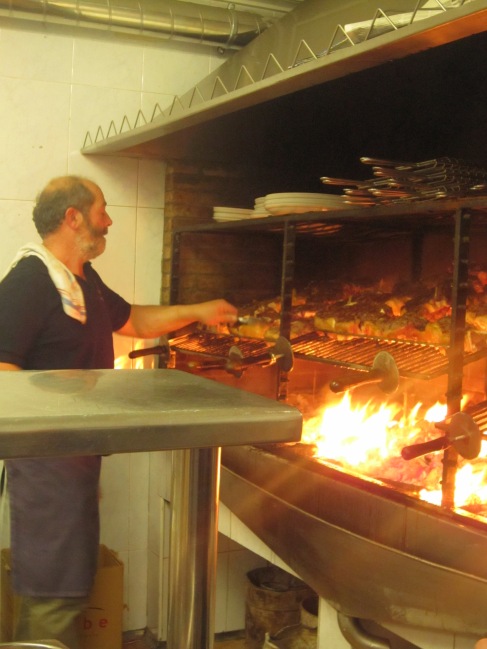 The second course was a t-bone steak. Probably grass fed, local beef. This was also absolutely amazing. The char provided so much flavor and it tasted so beefy. Very juicy and tender as well. 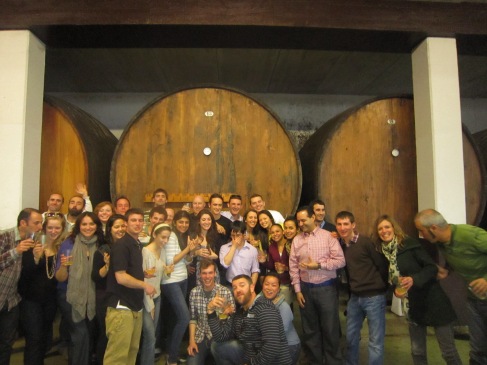 We were all obviously ridiculously drunk at the end of this all and had an awesome time. I now love Spanish sidre (perhaps partly because of the memories, but also because I like the funky taste. When I drink orange wines they remind me of sidre a lot), but the best part of Petritegi Sidreria was the atmosphere and cheerful “txotx” spirit that filled the room. It was obvious that the people of the Basque region are very proud of their culture and they don’t really consider themselves Spanish.