Maiko Jikuya is one of the very few female Toji (distilling meister) in Kagoshima (and Japan!) and the fourth generation Toji of Jikuya Distillery, a family run business that was established over 100 years ago. It is located in a small town called Satsuma in Kagoshima prefecture of Kyushu. The warmer southern regions such as Kagoshima, are more suitable for distilling Shochu rather than brewing Sake. 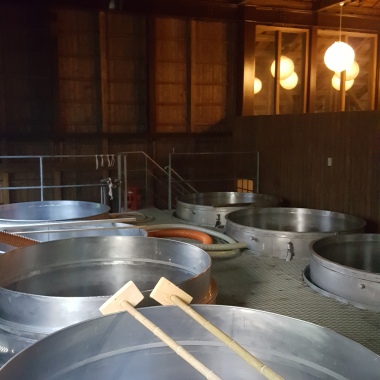 Since we visited in June, there was nothing going on at the distillery. They still make Shochu seasonally, which means that they wait for the sweet potato harvest in the fall, and the season continues from fall to winter. Shochu can be made from a variety of different ingredients but the most common are barley, sweet potato and rice (you can also find Shochu made of buckwheat, sesame, carrot, Kokuto, Kuzu and many more!). The main ingredient is not the only important- as in Sake making, the Koji and water play a vital role in making quality Shochu. 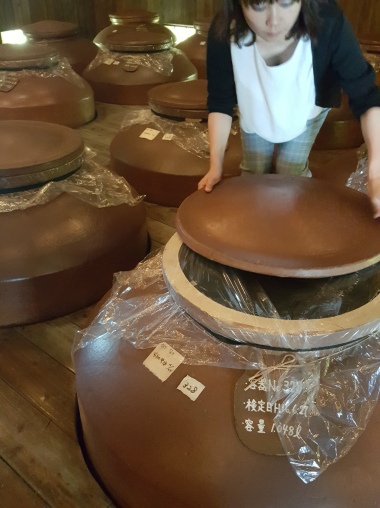 While Jikuya only makes sweet potato Shochu, they play around with different types of sweet potatoes and different types of Koji, which is what affects the aroma of Shochu. Koji is the national fungus of Japan, which is used for making Shochu, Sake, Miso, soy sauce, Mirin, and rice vinegar. It is used to inoculate steamed rice, barley or soy beans, which is then used as a sort of fermentation starter. For Sake, it is the type of yeast that influences the aroma, but for Shochu, it is the Koji that influences the aroma and overall character. All three types of Koji- white, black and yellow, are used in Shochu making, but in Sake making, breweries use mostly yellow Koji types. When yellow Koji is used to make Shochu, the result is a very floral and light spirit. In both Sake and Shochu, Koji is what breaks down the starches into fermentable sugars. 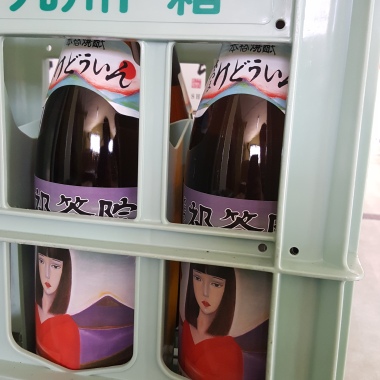 Sweet potato (Imo) Shochu is an acquired taste in my opinion, but I was surprised when I tasted the Shochus at Jikuya. When I think of a typical Imo Shochu I think of super funky aromas and a rich, caramel-like finish on the palate, but Maiko makes a lot of delicate, floral and fruit forward shochus that are quite feminine yet powerful. Jikuya ages their shochu in huge clay pots (Kame) for at least a year to be able to label them as Kame Shochu. We were lucky enough to try some young Annou Imo Shochu straight from the pot (so it was cask strength as well). I was amazed at how smooth it was.

We were also lucky to try their raw spring water (dug up from 40 meters underground) from Mount Shibi (pictured in the background). This is the water they use to make their Shochu. This water was ridiculously soft, with a full body. Apparently Mizuwari (half Shochu half water) and Oyuwari (half Shochu half hot water) made with this water is something special but unfortunately we did not get to try…

It would have been more interesting to visit during the busy season but in retrospect it was probably good that we went during the down season because Maiko actually had time to show us around! Jikuya only has 11 employees! I am always amazed at how small many of these Shochu distilleries and Sake breweries are. I hope that Jikuya’s shochus will be available in New York soon!