One of my most trusted foodie sources told me to go to Sornthong, a seafood restaurant. I had read about Somboon Seafood and T&K Seafood but I decided to go with this recommendation.

Just like seafood restaurants in Singapore, there is a large menu, and it’s almost impossible to choose what to order! The oyster omlette was recommended by our friend and so were the mantis shrimp, but the mantis shrimp were very pricey so we decided not to get them. Most of the customers eating there were either Thai or Japanese. We went on a Monday evening at around 7:30pm and it was packed. Luckily they have an upstairs section so we didn’t have to wait to be seated.

We ordered for three people (my unlucky boyfrind had gotten sick and had to sit and watch us eat this feast!!!): steamed prawns (smallest size), oyster omlette, kang kong with shrimp paste, grilled squid, black pepper crab and crab fried rice. It was A LOT of food but somehow we managed to finish most of it 🙂

The shrimp are kept in tanks (common for these types of seafood restaurants). I think most of the frozen shrimp available around the world are from Thailand, but they are definitely way better when you have them at the source (even though they are most likely farmed I guess?) These prawns had sweet flesh packed into their shells. They gave us several different chili dipping sauces for these. 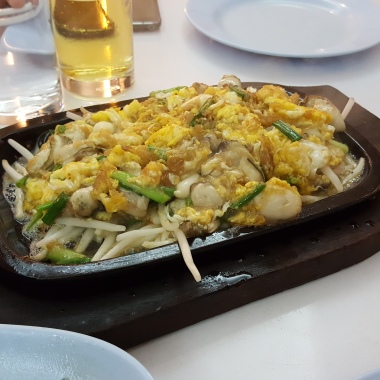 I liked the oyster omelette because it wasn’t really sweet. The oysters were plump and the bean sprouts had a nice, crunchy texture. The egg was perfectly undercooked.

The black pepper crab was better than any I’ve had in Singapore. Partly because of the crab itself (super meaty and packed) and also because they use some fresh black peppers, which made it extremely fragrant yet light. 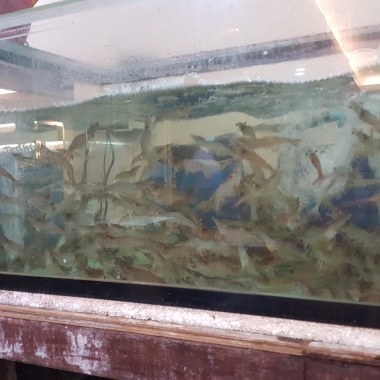 With all this food, our overall bill was around 1000 baht (UD$30) per person. Not cheap by Thai standards but coming from New York it was quite the bargain! I would definitely recommend this spot to my friends with no hesitation.