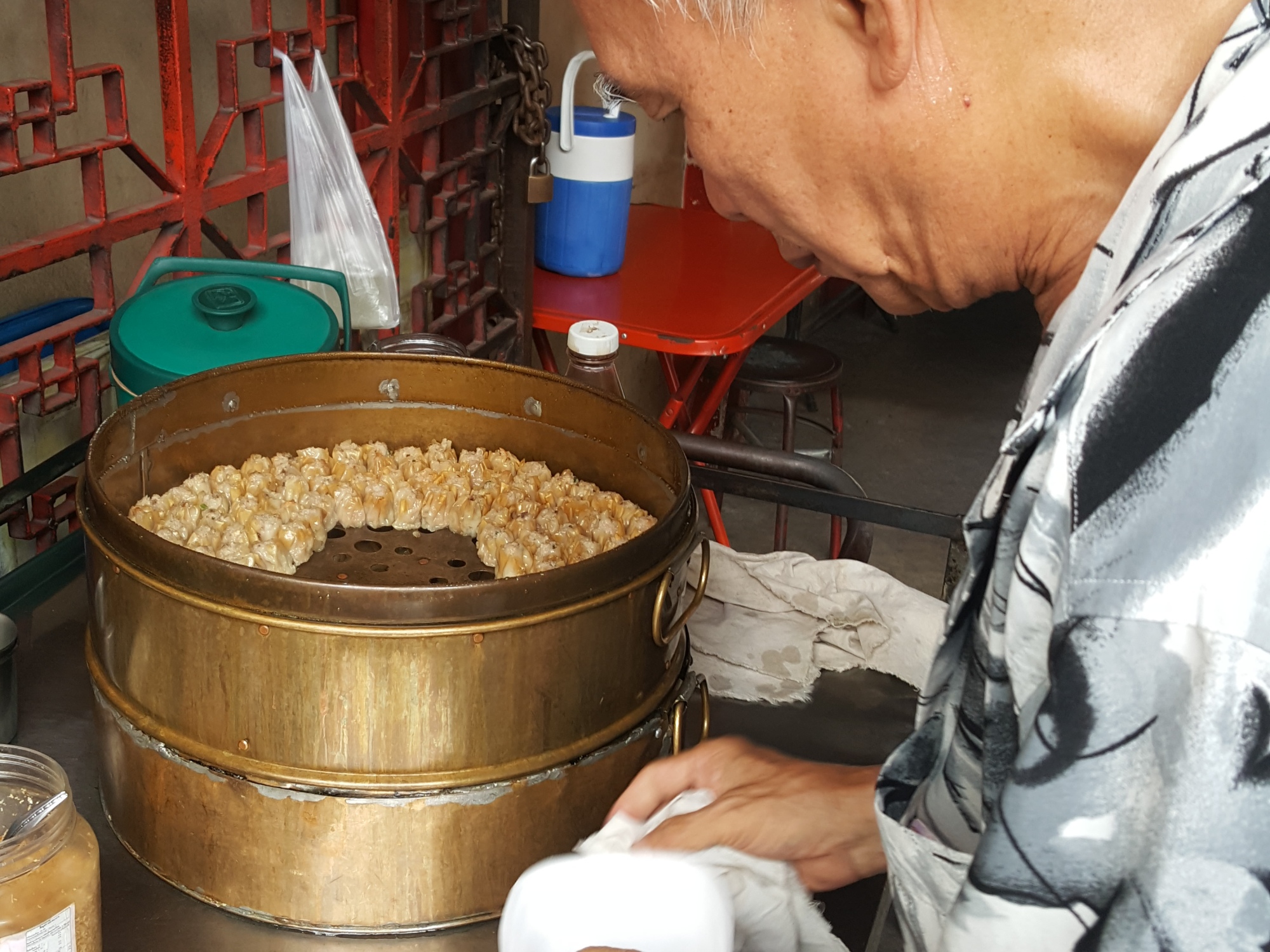 This short trip to Bangkok has involved a lot of eating (of course) and actually a lot more Chinese Thai food than Northern or Southern or the typical kind of Thai food that comes to mind for me. I already briefly visited Chinatown for the amazing crab noodles as Odean but we couldn’t leave Bangkok without a proper look around Chinatown.

There are so many things to try in Chinatown so I did a lot of research beforehand. I was determined to find the Khanom Jeeb stand that I read about on someone’s blog, and it actually wasn’t difficult to find. Khanom Jeeb are Thai versions of the Chinese siew mai, and I had read that this man makes his dumplings from scratch, even the wrappers. He can be found just off the main Yaowarat street on Plaeng Nam Road (he will be on the left side right at the entrance of Wat Yuan). I got 5 dumplings for 15 baht (they are tiny but still a great deal I’d say). These are great snacks to nibble on as you explore Chinatown. 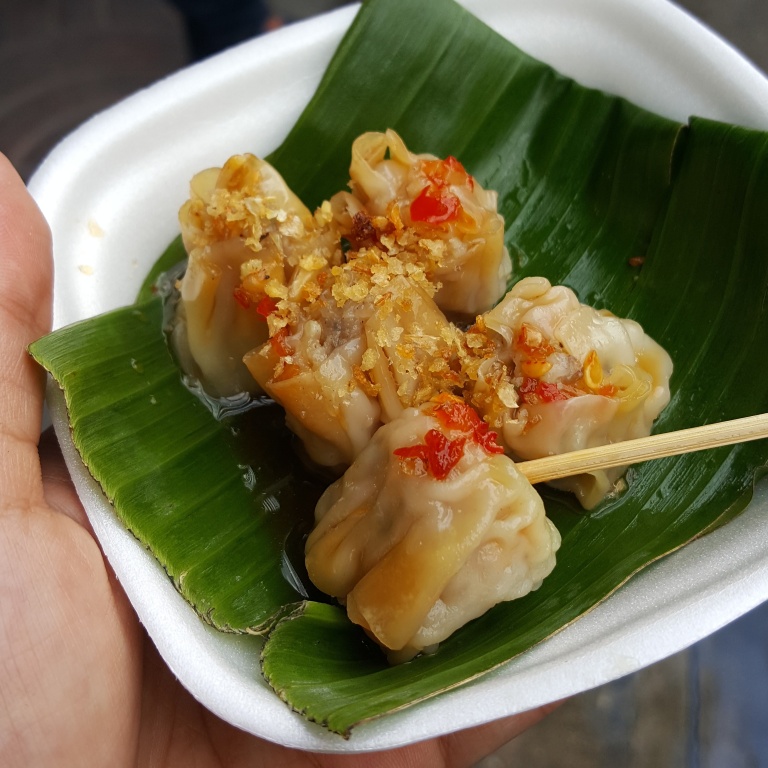 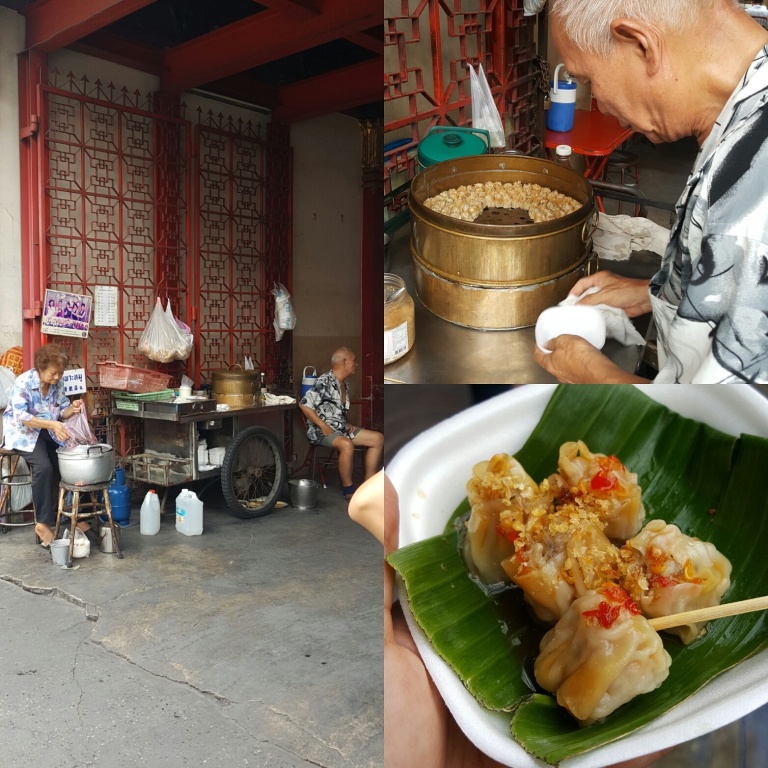 Even though it was a hot day, we made a pit stop at a tea shop (air conditioned though, so not a bad decision!) called Double Dog. The name sounds a bit strange and the storefront looks a bit cheesy, but they were legit, with a great variety of Chinese and Japanese teas. The teas were not cheap by Thailand standards, but we don’t have a lot of Chinese tea shop options in NYC so this was a treat. The teas were served in cute little gongfu tea pots. 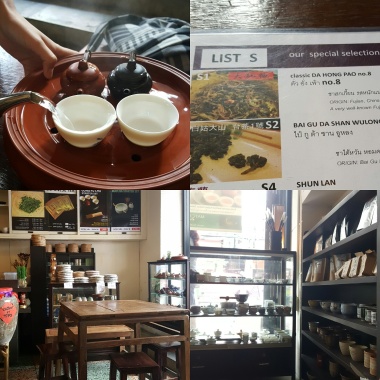 I came across these local ice lollies called Kiintim, which had a very cute logo. A very tempting array of different fruit flavors (all natural) were displayed by the freezer, and I chose the durian one. It had bits of durian in it and the texture was very nostalgic. The pomegranate juices looked very attractive so I bought a bottle but it didn’t taste as good as they looked. I think they added sugar to these drinks (just as a lot of the other fruit juices have sugar and/or salt added).

The last meal we had in Bangkok before leaving for Tokyo was at store that sells fish rice soup. My boyfriend insisted we try because he was fascinated by the super retro setting and old man, who has probably been making this one thing for a long time. He didn’t speak any English but they had an English menu and his daughter spoke some English. We ordered the butterfish rice soup. It wasn’t anything incredible, but it had やさしい味。。。which basically means it tasted gentle and kind (kind of like your mother’s cooking). I’m glad we tried his food though.